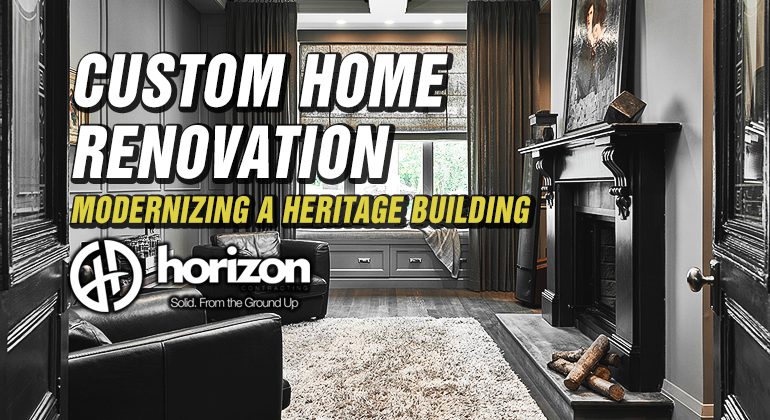 Renovating a heritage home brings a unique set of challenges for a builder. Digging into a house’s long history and peeling away layers of renovations usually reveals construction mistakes and shortcuts – and this Victoria, BC house was no exception.

The owners of this historically significant home had a dream to return the home to its former glory. This required both undoing decades of substandard renovations as well as reconstructing heritage elements in several additions to the home. This required a two prong approach of restoring the historical look and feel of the house while also seamlessly incorporating modern amenities and upgrades to bring the structure up to date with current building codes.

Built in 1892, the 3,000 square foot house had lived a number of lives before the current owners turned to Horizon Pacific Contracting – A Mike Holmes Approved Homes builder from British Columbia who specializes in home additions, kitchen renovations, bathroom renovations and other renovation projects plus more.

This heritage home is situated in one of Victoria’s oldest residential neighbourhoods, the house was converted to a duplex in the 1940s and was later sectioned off to make multiple rental suites. When work began, the house was structurally unsound and was largely worn out from years of rental traffic.

For the most part the house had to be rebuilt from scratch. The extensive work included constructing an addition on the front of the house, adding attic space and an addition in the back to enlarge the kitchen. Choosing to make the project a Holmes Approved renovation gave the owners additional information and piece of mind with Mike Holmes inspection inspecting several points in the renovation.

The homeowners wanted this Greater Victoria house to feel like a living space that reflects their personalities and life’s journey. The house was designed to accommodate the treasures the couple had accumulated on their travels throughout the world as well as optimize the living space. 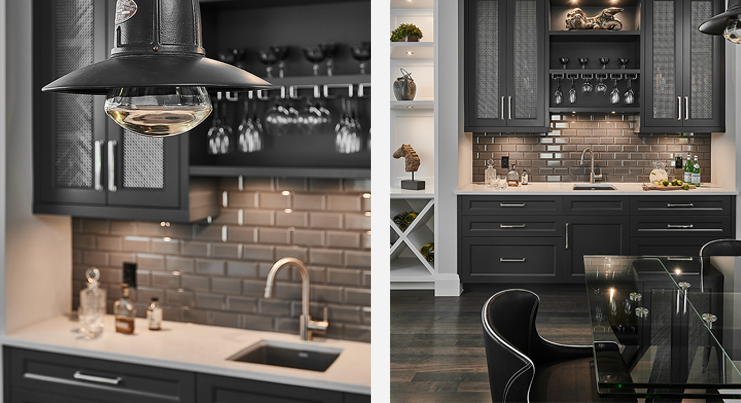 The kitchen is a focal point for the house both as a gathering space as well as a functional space and all the family members were considered in the design.

The cat has his own hidden door connecting the deck to the kitchen, giving him the freedom to come and go without asking his owners.

A coffered ceiling in the kitchen was a later addition to the kitchen design. It is a major feature in the house that is architecturally correct for the build period. Additionally, to maintain the sight lines from the living room as well as the heritage style, a pop up range hood was installed on the island range. 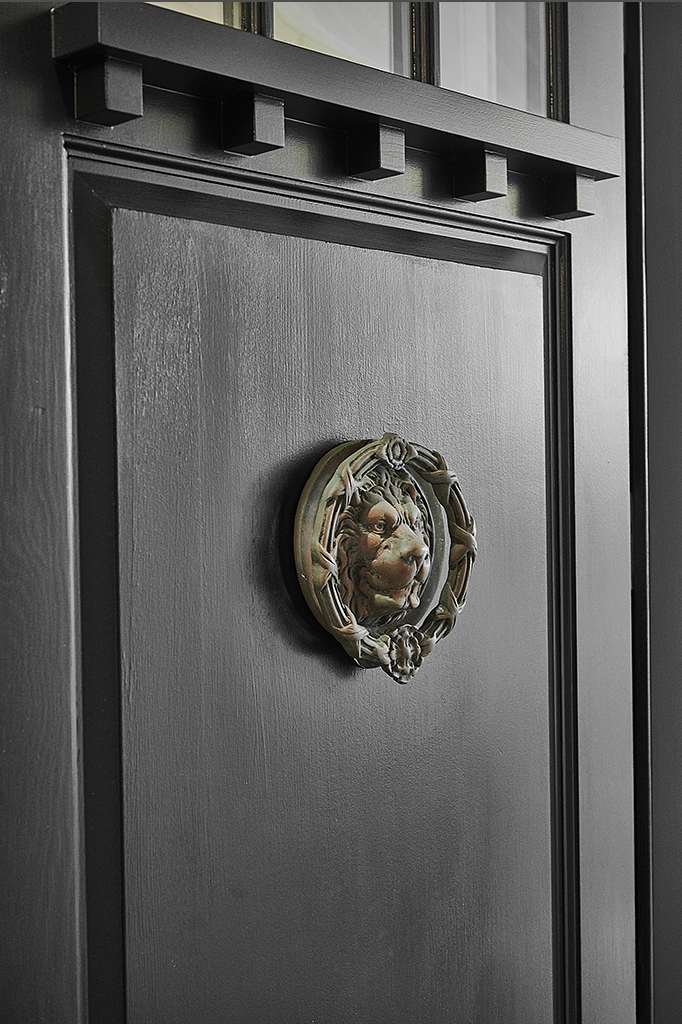 Historic features were retained where possible and in other instances were created to complement the existing features highlighted in the house design.

The house was lifted, providing the opportunity to improve the structure, energy performance, reduce air leaks, indoor air quality and building envelope while maintaining many of the home’s character features. The brick foundation the house had been resting on was replaced with a full structural foundation. The red bricks from the foundation were salvaged, cleaned and clad on the new foundation, upcycling the original materials and maintaining the heritage look of the house. The original red brick chimneys were also repurposed as brickwork on the home’s exterior. 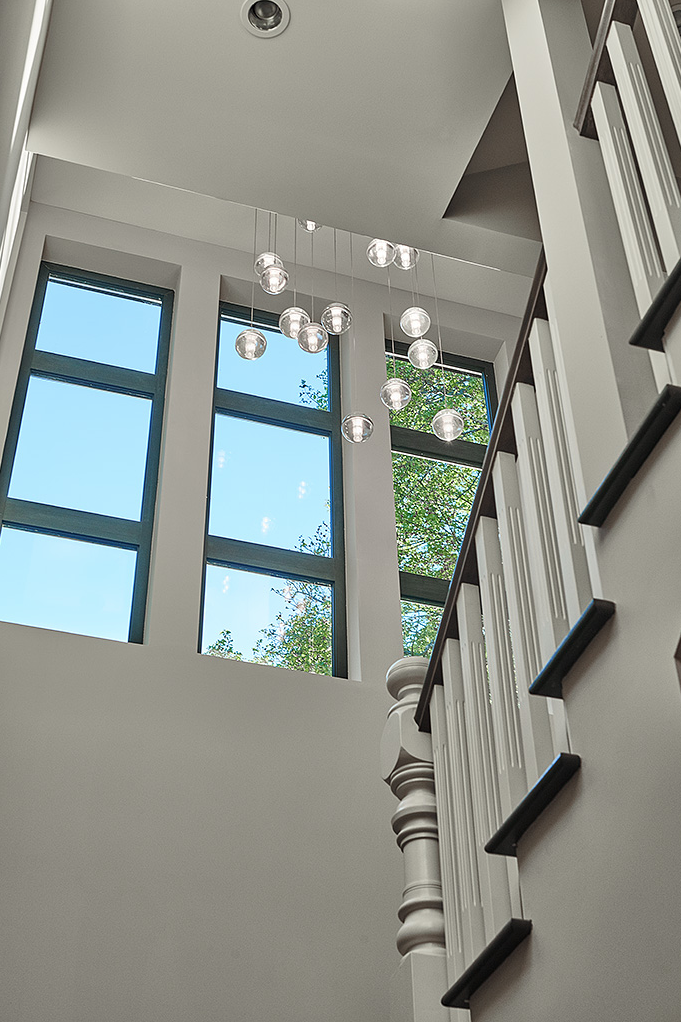 The house now meets full seismic code and shows no sign of its former life as a duplex.

The extensive renovations allowed the house to be rebuilt to a very high efficiency standard. The outdated heating system was converted to an air to water heat pump. 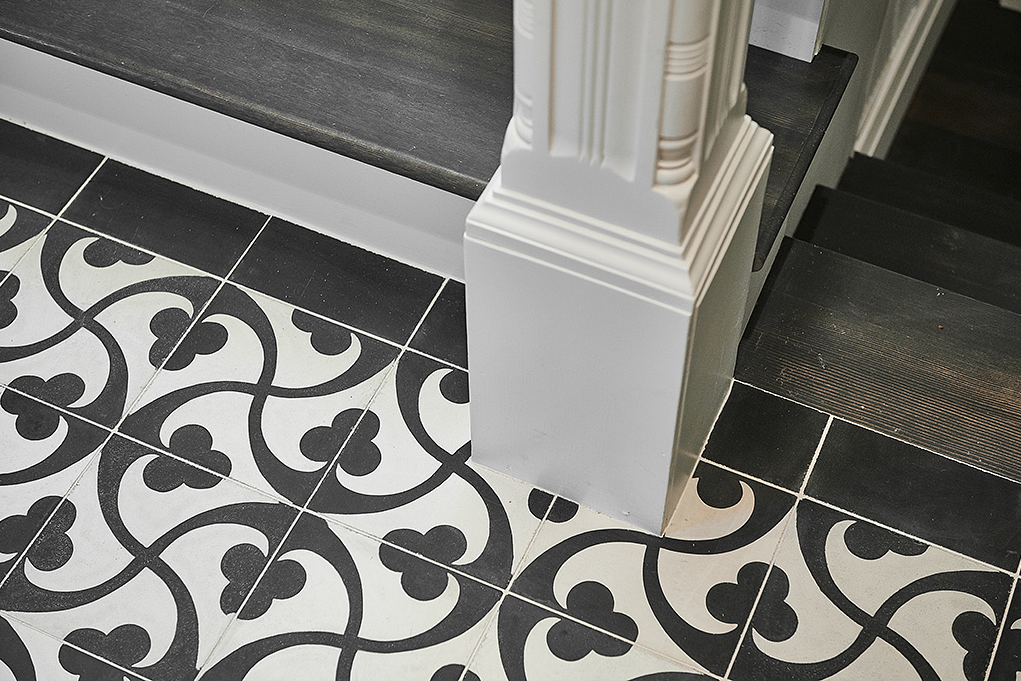 This made way for in-floor hydronic heat to be installed throughout the home.

For the most part lacking insulation prior to the renovation, the house was insulated with Rock Wool and a soy-based spray foam insulation to improve energy efficiency while maintaining green standards. All insulation products are formaldehyde free.

A HRV (Heat Recover Ventilator) was installed to harvest heat from the house and further reduce energy usage. Through the use of a heat exchange the house achieves 90% efficiency, a significant improvement over the original build, which is an overall improvement for energy consumption.

BP-100 sheathing membrane was used around the outside of the house to water proof the house against wet west coast conditions and to further increase the high performance of the energy efficiency. Because it allows moisture in the wall cavity to escape outward it also ensures the walls remain dry and the house remains heathy for the residents.

Fixtures were replaced with energy efficient fixtures that maintain the heritage design of the house with a very low power draw. 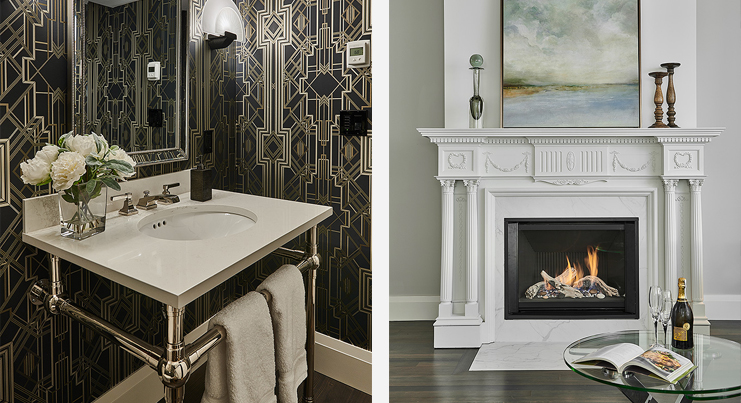 Whether it’s a bathroom sink or a fireplace, the time was spent on every detail to ensure everything is immaculate.

To learn more about Horizon Pacific click the button below. 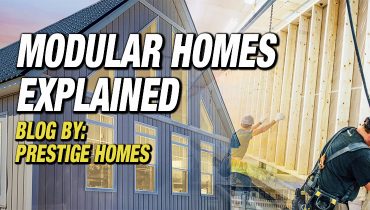 There’s a lot of misunderstanding around modular homes. Perhaps one of the confusing things about... 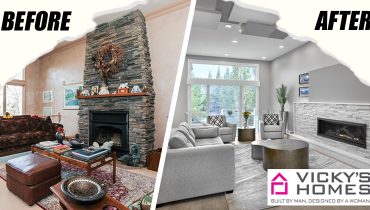 Vicky’s Homes Before & After...

This gorgeous Donsdale property was extensively renovated by Vicky’s Homes, a Holmes Approved Builder and Renovator....

Why Buy A Modular Home 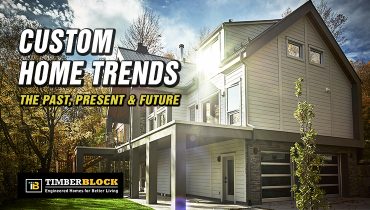 Blog By: Timber Block   Like almost everything, trends can change drastically from year to year - and the same...